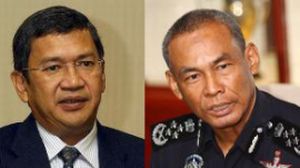 The dirt is out! It is the Attorney-General Gani Patail that the Malaysian Anti-Corruption Commission is trying to prod into prosecuting several people believed to be close associates of Sabah Chief Minister Musa Aman for their alleged role in a giant money-laundering scheme.

“That is why there have been so many unconfirmed news reports about highly-placed individuals close to Musa Aman being arrested. The leaks are coming from the MACC. It doesn’t want to show its hand yet, but it wants to send a very strong message to Gani and to IGP Musa Hassan,” a source told Malaysia Chronicle.

According to the source, Prime Minister Najib Razak – who has direct control over the MACC – does not want to offend Musa Aman. He is afraid of stirring up a huge negative political reaction from Sabah Umno should he press too swiftly and too hard.

“Obviously Najib is not doing this because he is really out to fight corruption but these people have gotten out of hand,” the source said.

“They have been manipulating the timber concessions and deals from Yayasan Sabah for themselves rather than channeling the money back to Umno HQ. If he doesn’t put a stop to it, there won’t be anything left for him. It is as simple as that.

Lending credence to the talk of trouble brewing between Najib and Musa Aman is the recent call by Sabah Umno Youth to give Khairy Jamaluddin a cabinet post. Khairy – the national Youth chief – is also the son-in-law of former premier Abdullah Badawi, and Musa Aman is a Badawi loyalist.

The highly unusual call to the PM was seen as a signal from the Sabah leader that he would retaliate if the federal government kept pressuring him.

“The PM, the AG and the MACC must come clean on this matter because it involves Malaysia’s good name. The money laundering activities are just too high-profile to be suppressed and the ICAC is already hot on the trail,” PKR Youth chief Shamsul Iskandar Akin told Malaysia Chronicle.

“It is shameful to hear stories out of Sabah and even Hong Kong that being a fellow Sabahan, the AG wants to help Musa Aman. Gani must answer to Malaysians: is this true, did he or did he not meet with the Hong Kong ICAC and was he trying to persuade them not to probe further into the case?”

Indeed the rumors have spread like wild fire. Names like Michael Chia and his Gang of 14 including senior lawyer, Richard Barnes, have been splashed in various blogs and online portals. Chia – who is widely believed to be one of Musa Aman’s top aides -was detained at the Hong Kong airport two years ago for allegedly trying to smuggle through some RM16 million in cash.

Last year, Shamsul went to Hong Kong to give evidence that Chia was indeed a nominee for Musa Aman. Shamsul told the ICAC that public funds were being illegally obtained and siphoned out from Malaysia and deposited into various accounts in Hong Kong at UBS AG, Bank of East Asia Limited, HSBC, Credit Suisse and Citibank. He also named four other people believed to have embezzled and laundered money belonging to the Sabah state government and its subsidiaries.

“Just like the French submarines case where Suaram had to go to Paris, we had no choice but to go to Hong Kong and lodge a report with the ICAC so that investigations could be carried out because back home, the MACC was refusing to budge,” Shamsul said.

“I believe the Hong Kong probe is now quite advanced, so even if the MACC still refuses to act, the ICAC will. They have come over to Sabah several times and the whole case can really blow up in Malaysia’s face. Money laundering is a big-time crime and if our country is tainted, there goes the credibility of our banking and financial system, not just the political.”

At the Putrajaya end, IGP Musa Hassan is believed to have thrown in his lot with Gani in this matter. The police chief was recently involved in a public spat with Home Minister Hishammuddin Hussein, who is Najib’s cousin.

“It is time for the authorities to clear the air rather than use underground methods. Too many questions have popped up including is the IGP related to the AG and where is his stand in this matter?” the source said.

“It is also well known in Umno circles that Najib favours Shafie Apdal as the new Sabah Chief Minister. But even though Najib is PM, Musa Aman is very powerful in Sabah. He is also very wealthy. At the end of the day, these factors may matter more.”

One thought on “The AG, IGP and Musa Aman vs Najib, Shafie and the MACC”