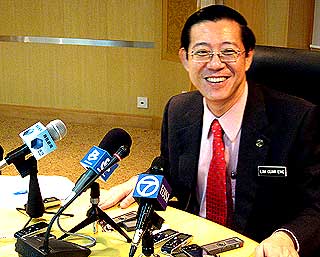 The Penang Chief Minister YAB Lim Guan Eng is leading a state delegation to Manila, Philippines from 26th October till 28th October 2011. The purpose of the trip is to visit and study the successful story of the City of Manila which has been named the second top Business Process Outsourcing (BPO) destination in the Asia-Pacific region by the International Data Corporation (IDC).

Philippines was also named as the ‘Off Shoring Destination of the Year‘ by the United Kingdom’s National Outsourcing Association. In the IDC report Manila was ranked second after Bangalore, India.

The Chief Minister’s visit will include meetings with main Shared Services & Outsourcing (SSO) players in the Philippines who are involved in contact centers, BPO services, data transcription, animation, engineering and software development. This investment trip is in line with the State’s objectives of having a BPO, SSO and Shared Information Outsourcing (SIO) hub for leading global SSO (BPO-KPO) companies to invest or expand their current operations in Penang.

While in Manila, the Chief Minister will meet up with the senior executives of Asian Development Bank (ADB) to discuss facilitation by the ADB on public and socio-economic projects undertaken in Penang; Alliance Global Group, Inc, and Manila Broadcasting Company. During this visit, the Chief Minister and delegation will also tour the Cyberpark sites.