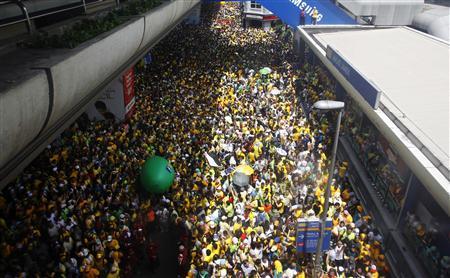 (Reuters) – Malaysian police fired tear gas and water cannon in clashes with thousands of protesters demanding electoral reforms on Saturday, raising the risk of a political backlash that could delay national polls which had been expected as early as June.

Riot police reacted after some protesters among the crowd of at least 25,000 tried to break through barriers, in defiance of a court order banning them from entering the city’s historic Merdeka (Independence) Square. They fired dozens of tear gas rounds and chased protesters through nearby streets.

Protesters also battled with police at a train station nearby, throwing bottles and chairs at officers who responded by firing tear gas rounds. A police car was overturned by angry protesters after it hit demonstrators. Most of the protesters had dispersed by early evening but sporadic clashes with police continued.

“They (the police) asked the crowd to disperse but did not give enough warning,” said Aminah Bakri, 27, with tears streaming down her face from the gas.

The police reaction could carry risks for Prime Minister Najib Razak if it is seen as too harsh, possibly forcing him to delay elections that must be called by next March but which many observers had expected for June. Najib’s approval rating tumbled after July last year when police were accused of a heavy handed response to the last major electoral reform rally by the Bersih (Clean) group. It has since rebounded to nearly 70 percent.

Some media sites put the number of protesters as high as 100,000, which would make it by far the biggest since “Reformasi” (Reform) demonstrations in 1998 against then prime minister Mahathir Mohamad.

The protest posed a delicate challenge for Najib, who is anxious to attract middle-class voters ahead of an election that is shaping up as the closest in Malaysia’s history.

But Najib must be mindful of conservatives in his party, wary his moves to relax tough security laws and push limited election reforms could threaten their 55-year hold on power.

Human Rights Watch was quick to condemn the police action.

“By launching a crackdown on peaceful … protesters on the streets of Kuala Lumpur, the Malaysian government is once again showing its contempt for its people’s basic rights and freedoms,” said Phil Robertson, the group’s deputy Asia director.

Malaysia’s Bar Council’s Legal Aid Center said around 200 people had been detained, far less than the more than 1,600 who were held in last July’s protest.

Bersih, an independent movement whose goals are backed by the opposition, has a history of staging influential rallies as Malaysians have demanded more freedoms and democratic rights in the former British colony that has an authoritarian streak.

Many of the protesters on Saturday were younger Malaysians who have become more active in recent years, chafing at political restrictions and cronyism in the racially divided Southeast Asian nation.

The July protest was a watershed moment for Najib, prompting him to promise reform of an electoral system that the opposition says favors the long-ruling National Front coalition.

The National Front is trying to recover from its worst ever election result in 2008 when it lost its two-thirds majority in parliament, giving the diverse, three-party opposition led by former finance minister Anwar Ibrahim real hope of taking power.

Najib has replaced tough security laws – ending indefinite detention without trial – relaxed some media controls, and pushed reforms to the electoral system that critics have long complained is rigged in the government’s favor.

A bipartisan parliamentary committee set up by Najib this month issued 22 proposals for electoral reform, including steps to clean up electoral rolls and equal access to media.

But Bersih has complained it is unclear if the steps will be in place for the next election.

The government says it has already met, or is addressing, seven of Bersih’s eight main proposals for the election, which will see the first use of indelible ink to cut down on fraud.

Bersih says the proposals do not meet most of its key demands, including lengthening the campaign period to at least 21 days from the current seven days and international observers at polling stations. Bersih and opposition parties say they have unearthed multiple instances of irregularities in voter rolls, including over 50 voters registered at one address.